WEST ORANGE, N.J. – Nov. 8, 2016 – The first annual “BARKtoberfest” pet adoption event recently took place in the Berson Learning Center parking lot at Turtle Back Zoo  in West Orange, a facility of the Essex County Parks Department. The event raised more than $3,300 for participating animal shelters and rescue groups, including The Friends of the Livingston Animal Shelter, part of the Healthy Community Healthy Youth Initiative of Livingston. A total of 20 dogs and cats were adopted, with many applications still in the works.

Livingston-based Eastman Companies and The Shoppes at the Livingston Circle  lent their support by sponsoring a Pet Photo Booth & Costume Contest. Those in attendance had the opportunity to have their pet’s photo taken and entered into the contest on The Shoppes at the Livingston Circle’s Facebook page. Prizes were donated by Eastman Companies and the shopping center’s tenants, including Choice Pet Supply, The Fresh Market, Ike’s Bagel Café, Hand & Stone Massage and Facial Spa, Wine Legend and Olive Garden. 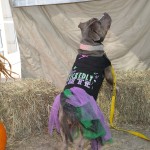 Pictured here is the first-place winner, Opal, who is available for adoption through The FernDog Rescue Foundation in Caldwell.